Hope for our future 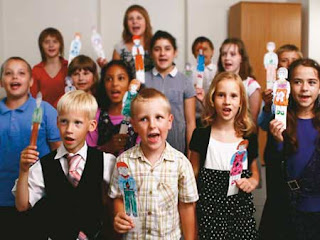 The primary program in church today was one of the best I have ever attended.  The spirit was so strong and I was moved to tears at multiple times.

Seeing their bright and hopeful faces, hearing their testimonies in song, and feeling of their spirits, gives me hope for our future.  They are truly a great generation, saved for this dispensation of time to usher in the second coming of our Savior. 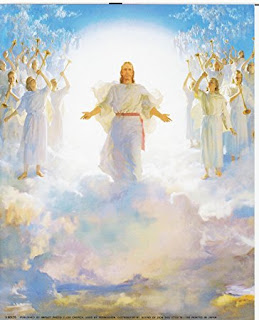 Today we will experience a partial (70%) solar eclipse today over the next 3 hours or so.  Last night the kids and I made some viewing boxes similar to what I made in 3rd grade when ironically enough I was living in Arizona (Chino Valley) and fashioned a similar tool out of an oatmeal can.  February 26, 1979 also a Monday.  I remember very clearly making the viewer the week prior then safely watching the phases of the eclipse.  Back then solar glasses were not nearly as readily available and we did what we could with what we had.

Very very cool that my kids can now experience something similar.

My father is on his way up Wyoming Peak even as I write this, of course if I know Dad he probably left plenty early to be in position well before necessary.  I wish I could have made that hike with him.  I made that hike with him from the Old Mill in Dry Creek Canyon and back (50 miles round trip) when I was 11 as part of the 50 miler award for scouting.  Dad just texted me as I am writing to inform me that he is on top.  Talk about being in sync!!!

Today is also President Monson's 90th birthday and I challenged the kids to do something kind for someone else per his birthday wish.  This past weekend Carter and I participated in Stake Youth Conference and we were able to do a lot of service for several area charities and non profit organizations.  From 9-4:30 then a pool party from 6-8:45, then Sunday evening 6-8 for the wrap up.

Well we have begun a new school year.  Lots of preparations leading up to this day.  School shopping to find all the cutest outfits for Madelyn and durable clothes with room to grow for Carter.  New shoes, Open House events, schedules, planners etc.

Last night I had the cherished opportunity to give each of the kids a blessing.  I remember my father doing the same for me and my siblings as we progressed through our respective academic journey's.  I can clearly remember getting a blessing from my father each year of college as well.  I have gone to my father at other times when changing a job and getting ready from my mission and then marriage.  I remember asking my Uncle Evan to stand as proxy and give my a father's blessing before I started my job at General Motors.

I'm grateful that I have continued this tradition with my children and that they look forward to getting these blessings and the fact that they've learned that the Priesthood is very real and that they can and are truly blessed by it.  It warms my heart when they remind me that we need to have blessings before the first day of school and of course when they feel sick or need other spiritual lifting they have come to me and asked for a blessing.

I know that Satan is aware of the blessings of the Priesthood as well and that he is working overtime on our family.  We have reestablished a habit of Family Home Evening as well as nightly Scripture Reading.  These both help to build up our family so it makes sense that the he would do more to counteract it.  Knowing this helps us to put things into perspective and remind ourselves that when he's working hard we must be doing something right.

On the way to work this morning I was listening to Alma Chapter 7 and like many places in the scriptures reference was made to the Atonement and the infinite sacrifice that it is.  I pondered the fact that he did this for ever person I was passing on the freeway coming and going, for every person I'd ever met or seen regardless of their situation in life.  I reflected by to a time on my mission where I stood on a bridge for a fireworks display and the river bottom what filled with a sea of people in both directions for as far as I could see.  I remember an announcer commenting that there were a half a million people in attendance.  The shear magnitude of that many people is mind boggling and to think our Savior atoned for multiple times that many people.  Truly an infinite sacrifice.

I am grateful for the Priesthood throughout my life and glad that I can carry on the traditions of my forefathers.
Posted by Daryl 1 comment:

It is said that the journey of a 1000 miles begins with one step.  Events of the last couple days have reminded me of this.  I'm also reminded that we never know where our influence will end or how far it will go.

In September of 1996 I spoke in Stake Conference at BYU on the topic of missionary work.  I had recently returned from a trip to California where I had place a Book of Mormon with My Uncle Dan and Aunt Betty (Uncle Stan Fittinger's sister)  Although the placement didn't result in a commitment to hear the discussions from the full time missionaries, I had planted a seed.

In August of 2006 I returned to California to attend the wedding of my Cousin Bret.  At one of the receptions my Aunt Betty approached me and said, "You'll be happy to know we joined your church and we were recently sealed in the temple." Of course she meant The Church of Jesus Christ of Latter-day Saints.  Not only had Dan and Betty joined but my cousin Steve, their son, and his family had joined as well.  They too received the blessings of the temple.

Yesterday afternoon I got a message from the Bishop I served with in Maryland and he thought I should know that Leonard Evan, someone I had a long history with, was getting his endowments out today.  I mentioned this to Elizabeth and felt like I had the sky miles to make the trip.  Liz wanted to go with me so we used all the miles and a little bit of savings and caught a red eye flight first to Atlanta then to Philadelphia.  The Bishop picked us up at the airport and we made the trip over to the temple.

Now, back in 2008 I met Leonard for the first time as I was an Elder's Quorum President working to reactivate members within our ward boundaries.  In time Leonard came back to church and little by little became very active in the church.  In 2014 I moved to Arizona and the family remained while we worked to sell our house there.  In 2015 on a return trip to Maryland I was able to attend Stake Conference where Leonard was presented and sustained to receive the Melchizedek Priesthood.  I had the great honor of conferring that priesthood on Leonard and ordaining him to office of Elder.  And then earlier today, I got to see the priceless expression on his face as I entered the chapel to go through the session in which he received his endowment.

Liz and I had been part of the building of the kingdom that brought about the Temple in Philadelphia so it was an added bonus to get that chance to attend this particular temple. 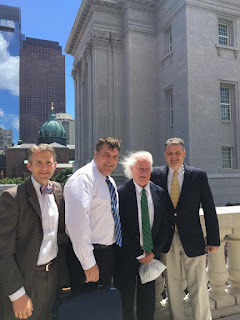 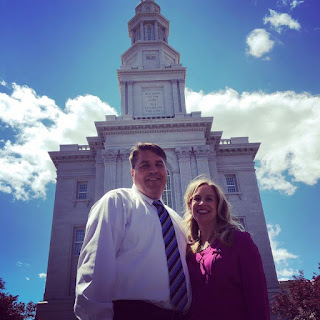 Married in the Salt Lake Temple 18 years ago next month

I'm looking at a deep blue sky filled with puffy white clouds spanning Arizona as far as I can see.  I'm reflecting on my heritage and all of the generations that went before me.  My ancestors and their trials and the lessons they taught and still teach me.

I stumbled across a "resume" that my great uncle Darwin wrote.  It is a nine page write up documenting a little bit about his parents and siblings.  Having grown up in the same Rocky Osmond that he refers to as the 80 acre family farm it takes me back to my own childhood and frankly reminds me once again that I would very much like to put on paper my own life story.

I can't help but wonder if someone will take as much interest in my life as I do in the lives of my ancestors.  It's amazing to me that in my 45 years, now in my 46th, all of the places I've been and the things I've seen and the people I've met.  All that I've accomplished seems in some ways to be a result of my DNA.

Anyway just a short note but a statement of resolve that I will one day write my story if even only for myself.
Posted by Daryl 3 comments:

Between 7-8 PM this evening Carter went into a room with 3 gentlemen selected to represent the Boy Scout Council and gave an accounting of his journey to Eagle Scout.  Carter recited the Law and the Oath like he'd done a hundred times before, but this time he had to explain to the Board what those things meant and what they meant to him.

Carter has worked hard for the last 5 years and just five days past his 16th birthday he was unanimously approved to receive his Eagle Scout Award.  He was told that he had completed an exceptional project and that his packet/binder, that tracked all of it, was the best they'd ever seen.  They asked him how much of it he did and how much his parents did and he proudly reported that he had done all the work.  Elizabeth and I helped him along the way but Carter did the work and the project is intended to have the Scout lead and not to do all the work.

Carter cried on the way home because he felt the magnitude of what he had accomplished.  Only 4% of all scouts actually achieve the rank of Eagle Scout.  I am part of that number and I am proud to welcome Carter to the Eagle's Nest. 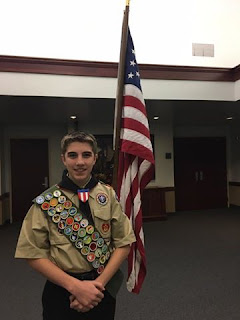 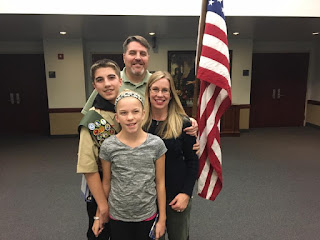 We were instructed not to plan a Court of Honor until we receive the official paperwork from National but the date recorded for his advancement will be January 12, 2017.  The nice thing about this is that the weather will be more conducive to family visiting and we have plenty of time to plan and prepare an excellent program.
Posted by Daryl 3 comments:

Promote Your Page Too